Well, the fascists are at it again.

They're "infiltrating" and organizing grassroots Trumpist rallies under the guise of "civic nationalism." While this is nothing new, there's a brand new flavor of diarrhea to add to the shit smoothie, or at least it's a new flavor here in Colorado. So who's responsible for the smell of fresh stool? None other than the Proud Boys. 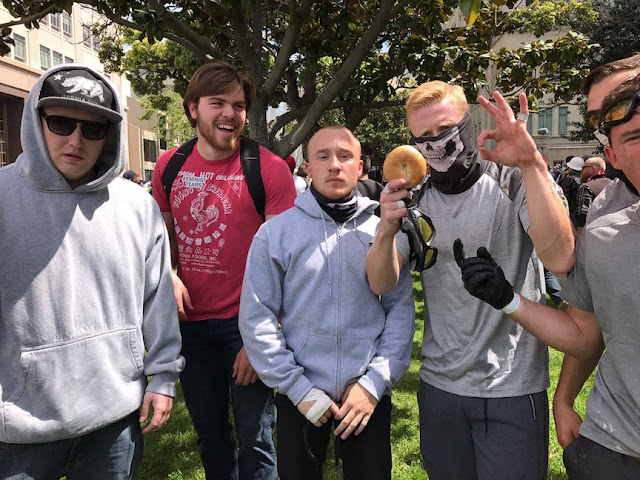 These shitheads and their fascist allies have called for two events (so far) in June. 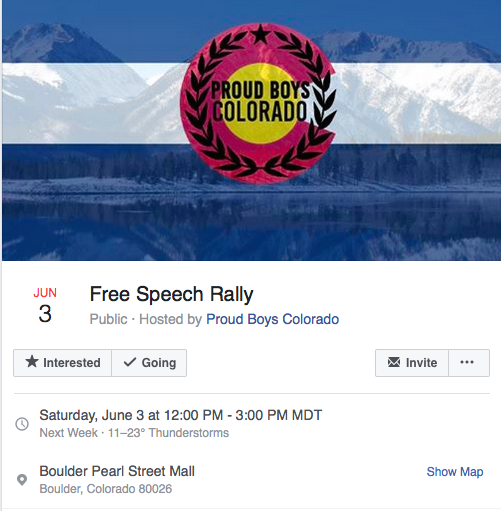 One is a "free speech" rally taking place in Boulder on Saturday, June 3rd, at the Pearl Street Mall at 12 PM. 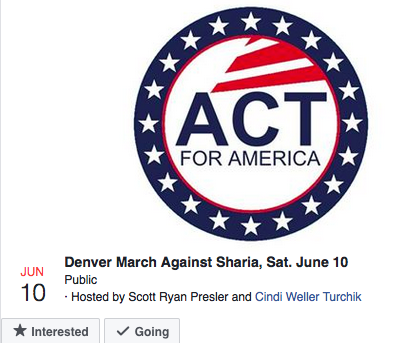 The other is a "march against sharia" on Saturday, June 10th in Denver at the Capitol at 3:30 PM.

We're calling for everyone who wants to stand against white supremacy and defend their community to show up and voice their opposition. We'll be gathering an hour prior to both events at their respective locations. On June 3rd we'll be at the Pearl Street Mall in Boulder at 11 AM. On June 10th we'll be at the capitol steps at 2:30 PM.

Still not convinced? Need a little more understanding of just who the Proud Boys and other fascists are that plan on attending these rallies? Sure, here you go:

We'd call the Proud Boys clowns but that would be an insult to respectable clowns everywhere. (WHOOP WHOOP FAM!). Instead I think we'll stick with the diarrhea metaphor. Because the Proud Boys are the liquid yellow diarrhea that no matter how much you wipe, it doesn't go away and leaves your butthole irritated as fuck. They're headed by millionaire and overall total piece of shit Gavin McInnes. McInnes is openly racist, anti-semitic, and misogynist. In addition to all of his other shitty qualities (including his facial hair, c'mon man you look stupid!). This article written by McInnes entitled "I'm Not A Racist, Sexist, or a Homophobe You N*gger Slut F*ggot" speaks for itself. In similar vein to the article, here's a video of him compiling all of his most horrible attributes into one sentence:


Recently, the cultural icon of the Alt-Right, Kyle "Based Stickman" Chapman, announced that he was forming a "fraternal order of alt-knights" that exists within the Proud Boys. What is the word for diarrhea within diarrhea? It's like diarrhea inception. A subgenre of diarrhea. Anyhow, that's right, the ultimate of cosplay fanatics has decided to recruit and further enhance his agenda of dressing up like a fucking idiot and attacking protestors with homemade weapons in defense of fascism... only to have his ass handed to him over and over again. 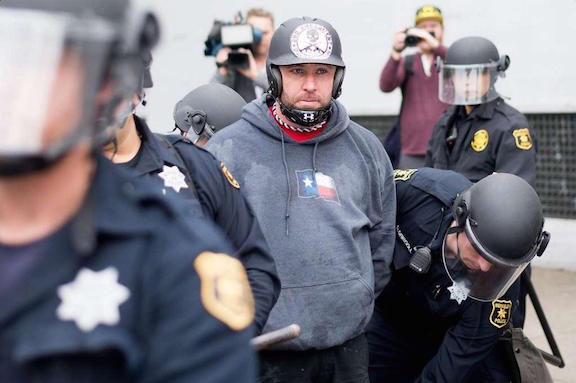 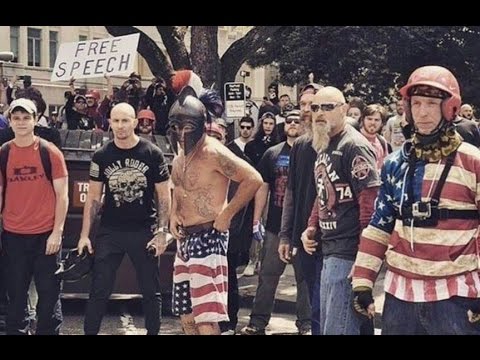 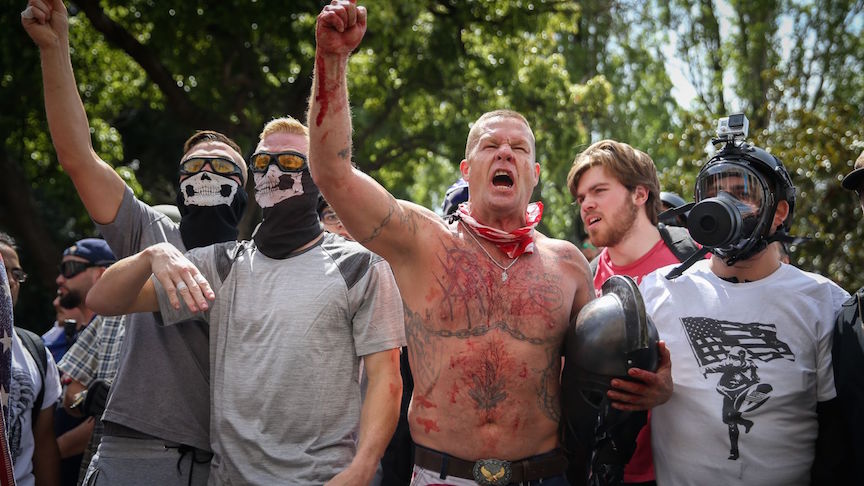 This "fraternal order" operates exactly like such. They have rules and "degrees" upon a hierarchy that are incredibly reminiscent of college fraternity hazing. They even beat the shit out of each other until their newest "pledge" can name five cereals in order to level up to the second degree.

Most concerning, however, is not the weird rules about masturbation (seriously? wtf y'all), but instead it's that to achieve the fourth and highest degree, one must brawl with anti-fascists in the streets. In order to "level up," Proud Boys around the country have been organizing "free speech" rallies. These are thinly veiled attempts at baiting anti-fascists into street fights. If you want to fight us, you fucking turds, why don't you just come out and fucking do it instead of hiding behind lines of riot police? It's interesting to note that Proud Boys, FOAK, and straight up run of the mill Nazis all have one enemy in common: anti-fascists. Why is that? Could it be that they are fascists and just refuse to acknowledge that in any meaningful way whatsoever? Why are we even asking this like it's a question. Of course they're fucking fascists. Fascists who tie themselves up with civic nationalists to legitimize their own endeavors. Meanwhile they exist solely to act as a paramilitary group for the Trump administration and this new brand of fascism with neoliberal tendencies (depending on how Trump feels that day). Hmm, sounds a lot like the brown shirts.

But back to the point. As we said, the Proud Boys are hosting a "free speech" rally in Boulder at the ambiguous location of "The Pearl Street Mall". Very specific guys. Normally we wouldn't find it all that shocking that a bunch of racist frat boys decided to walk up and down the shopping mall in Boulder on a Saturday afternoon... Nothing new there, but this "free speech rally" has attracted the Nazi shitheads over at the Daily Stormer, the same fucking idiots we doxxed back in March. 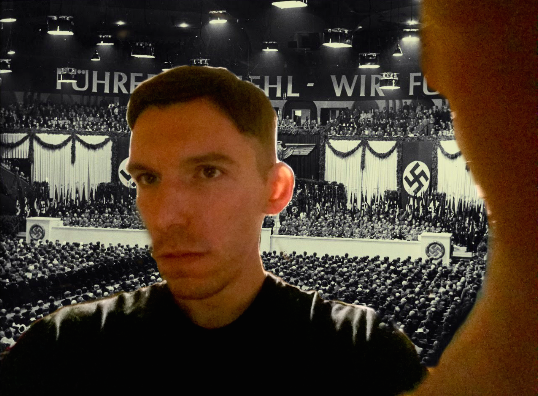 Josh Yeakel is a neo-Nazi who enjoys spending his time advocating for the extermination of homeless people and threatening children on the forums of the Daily Stormer, a neo-nazi website. Fecal Yeakel and his company of whiny crybabies are planning on attending the rally. Mr. Fecal even contributed his own flyer for the event. We know it looks like a bad parody of real Nazi shit, but this dude is serious. Seriously STUPID, that is.


So it looks like the Proud Boys are destined once again to violently defend Nazis, giving them a platform and a voice. Fuck that shit. This was never about free speech. It's about defending ourselves and each other against people who actively want to harass, assault, and even kill
members of our community. Just look at the news. It seems like almost every day a new racist murderer comes to the spotlight. A few people come to mind:
The above mentioned are all racist murderers. But they didn't come up with such violent white supremacist ideologies in a vacuum. They learned from others. They listened to racists. Famous racists. They found organizations like NPI (National Policy Institute, Dick Spencer's organization that advocates for a white ethnostate) and the Council of Conservative Citizens. They went to websites like the Daily Stormer, Stormfront, and Iron March. They joined groups on social media like "Alt-Reich: Nation." And we're supposed to let this continue? There is no difference between saying and doing. Saying is doing. When you advocate for genocide, rape, murder, you are doing something. People have died for this. How many more will it take before we recognize "free speech" rallies for what they are? How long before these motherfuckers come for your friend, your neighbor, your loved ones? Before they come for you? How long before nine people are killed during prayer in a church, except this time it isn't in South Carolina, it's right down the street? Are you willing to let that happen?

We won't stand by and allow these fascist, white supremacist shitstains to spread hateful rhetoric. We won't let them establish any more of a foothold here in Colorado and we'll stomp on them until every last racist dingleberry fucks off forever. We know who you shitheads are and we're watching you.

We intend to win!

We wrote this article and then immediately learned that yet another name can be added to the list of racist murderers inculcated in the cesspool of Alt-Right culture: Jeremy Joseph Christian. On Friday, May 26th, Christian began to verbally assault and harass two women on public transit, one of whom was wearing a hijab, with racial and anti-Muslim slurs, prompting other passengers to jump up in defense of the women. Christian then attacked those passengers, viciously stabbing three people. Two of those passengers are dead, a third is in critical condition.

This piece of shit wasn't intoxicated or "out of his mind," as the media will attempt to say, but instead he was a violent white supremacist who had been harboring racist ideals for a long time. Besides posting white supremacist garbage on social media, Christian had been showing up at "free speech" rallies just like the ones the Proud Boys call for and organize. At one such rally on the 29th of April, he gave Nazi salutes and called protestors racial slurs. These are the kinds of red flags that we need to watch out for, that we need to confront, that we need to eliminate. They are the precursors to disaster. When the Proud Boys host these "free speech" rallies they are allowing people like Christian to spread his hate, to up his ante, to attack and even murder people. They are responsible and to that end we'll hold them accountable. This shit has to fucking end.

We want to take a moment to honor these heroes, both fallen and surviving. They stood up and did what must be done to confront fascism. Rest In Power Ricky John Best and Taliesin Myrddin Namkai Meche. We wish the survivor a speedy recovery. Please send your love and support, and donate here to help pay his hospital bills. Please also donate here to help the families of Best and Namkai Meche.
Posted by rockymountainantifa at 2:30 PM