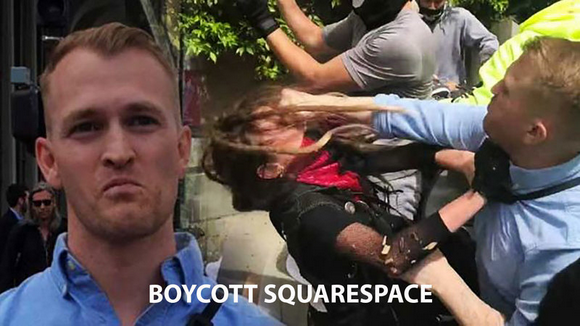 Squarespace, a popular web hosting service for businesses and creative professionals, is hosting white supremacist/neo-nazi groups: Identity Evropa, Radix Journal, and Richard Spencer's National Policy Institute. Squarespace has been informed of this issue repeatedly by email, but has refused to take the websites down.

Identity Evropa is a white supremacist/neo-nazi “fraternity” for people of “European, non-Semitic heritage.” The group’s website distributes propaganda on “white identity” and “race, evolution, and behavior.”  The group’s physical activism includes spreading fascist-themed fliers on university campuses and holding anti-immigrant rallies that portray people of color as inherently criminal. Identity Evropa’s founder, Nathan Damigo, has committed violent hate crimes against people of color and was recently videotaped punching a woman in the face at a rally.

The National Policy Institute is led by Richard Spencer, a documented neo-nazi. NPI's website distributes “research” on “understanding Jewish influence” and supposed “racial differences in intelligence, personality, and behavior.” Spencer describes immigration as a “proxy war” and argues that white America must “conquer or die.”

Radix Journal is a collection of white supremacist essays. Some speculate about “Eugenic” policies “to flush disloyalty from our gene pool.” Others complain of a “Jewish assault on Europeans” and the failure “to expel the freed slaves from the United States.”

Squarespace has been notified via abuse@squarespace.com, that these websites violate their Acceptable Use terms. Squarespace’s continued hosting of these websites constitutes a tacit endorsement of their content.

Squarespace also shares moral responsibility for the violent and threatening activity organized via these websites. Squarespace profits from neo-nazism and white supremacism as long as it retains Identity Evropa, Radix Journal, and the National Policy Institute as customers.

WE MUST NOT STAND FOR THIS.

Squarespace must end its business relationships with white supremacists. Tech companies must act in accordance with the principles they claim to support. Until Squarespace enforces its own Acceptable Use policy by REMOVING HATE SITES people of conscience should #BOYCOTTSQUARESPACE. Podcasts and other businesses with a social conscience should not accept Squarespace's ad buys.