On June 26, 2016, a fascist alliance made up of Golden State Skinheads--a white nationalist Hammerskin gang in California, and the Traditionalist Workers' Party--a white nationalist separatist group lead by Matthew Heimbach, organized a failed rally on the California Capitol steps in Sacramento.  Heimbach, who organized the rally, is clearly too self-important to risk his own injury, and was therefore nowhere to be found.  However, the neo-nazis from Golden State Skinheads who did try to rally, failed from the start when they were pummeled with bricks. As they began to flee, a riot ensued.

The LA Times and the Anti-Defamation League have both criticized the efforts of anti-fascist counter-demonstrators as providing "free publicity" to the neo-nazis.  We disagree on the grounds that the publicity shows nazis exactly what will happen when they try to organize publicly: 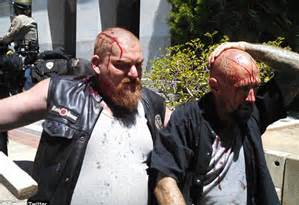 Since the event--where the ultra-tough Hammerskins cowered behind police lines to avoid injury--the neo-nazi gang members of GSS have shown themselves to be more than eager to turn into boot-licking snitches.  Derik Ryan Punneo, dubbed the "Knife Wielding Nazi" for his involvement in the riot, went as far as to start a pro-police campaign in Sacramento.

Our readers would probably like to know that of the 17 nazis who demonstrated on June 26, at least two came from Colorado: Joshua O'Leary and William Scott Planer.


William Scott Planer came to the attention of many in the Denver area when he and Shane "Choppy" McCampbell, another local bonehead nazi, reportedly picked a fight with a couple because a man "looked Jewish."  Despite the claims of Choppy's partner, Mackenzie Jackson, that the couple were "tweakers" and the two nazis were "defending themselves," the couple are actually known and respected people in Denver's community. We won't identify them, but the accusation that they are "tweakers" is altogether laughable.  In the fight, William Planer reportedly hit the man's girlfriend, demonstrating his willingness to commit acts of violence against women.

(TW: assault, violence against women, violence against queer people)
Planer's willingness to assault women is further demonstrated by this video of his involvement in Sacramento, where he can be seen hitting a woman--who was lying on the ground after a previous injury--over the head with a pole. There are also reports that he stabbed another woman later during the incident.

Already a double-felon, Planer moved to Colorado from California in 2013 after his most recent stay in prison.  In 2001, he caught a case after he held someone up with a stun gun to steal a backpack full of weed. In 2003, he was convicted for felony illegal possession of a firearm.  He did another prison sentence in 2010 after being convicted for harboring a felon.  Considering his criminal history, people might find it surprising that he at least wants others to think he has another firearm. 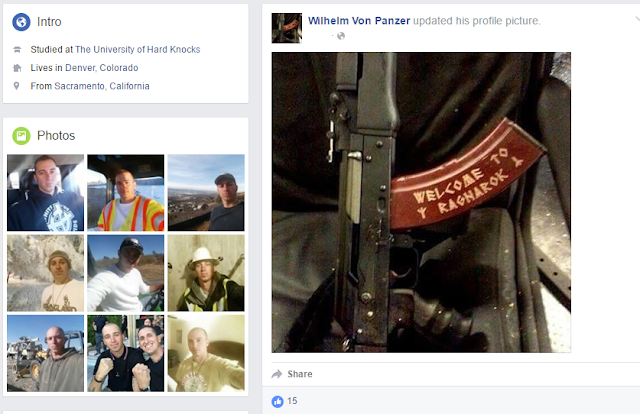 And ~~HONESTLY~~ for being a woman-beating self-described nazi hammerskin, why is it that he posts more selfies than a self-obsessed high schooler?  Also notice how his page claims he went to high school at the "School of Hard Knocks" (weird nazi social media trends?).  In reality, he attended Granite Bay High School in California, and appears to have a somewhat affluent family.


Joshua O'Leary can be seen in a picture posted by Matthew Heimbach of the Golden State Skinhead crew right before the rally in Sacramento. 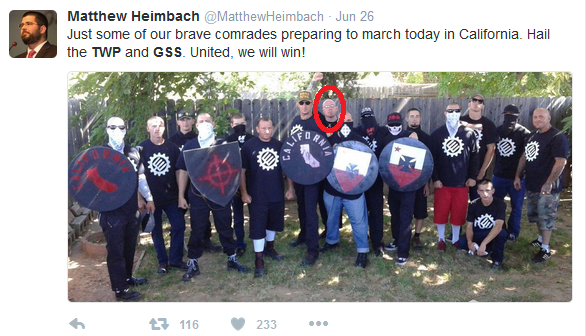 He can also be seen on William's facebook doing a sieg heil salute in front of some demonstrators advocating for religious tolerance. 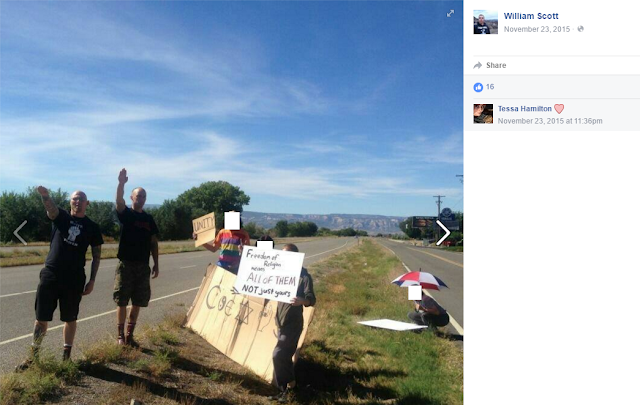 Joshua O'Leary and his wife Kassandra live in Colorado Springs. He spent some time in prison in 2013-2014, perhaps even longer.

Postscript:
Stay tuned sports fans!  We'll be out with an article about Shane "Choppy" McCampbell soon, but first we'd like to thank him for his negligent drunk revelations about William Scott Planer. We couldn'ta done it without ya Choppy! :)
Posted by rockymountainantifa at 4:46 PM