Update 12/8/16: School of Blues Colorado reports that they have removed Daboll from their Meetups after learning the truth about him: "David Daboll has been removed from the School of Blues. We all repudiate his activity in the strongest terms. We never had knowledge of nor participated in his activities. Thank you for the information." -Cameron Craig

Twas the night of the Super Bowl when we gathered to watch the Denver Broncos kick some ass! After just two cases of beer, something special happened. BRONCOS WIN! Our cheers roared with all our neighbors' as we celebrated this special moment in sports history. Like many, we washed the streets in all our joy, unraveling and screaming in the streets. That's right, Super Bowl champs! As the the night grew old and day began to peek through the darkness, the party came to its inevitable end. After winding down we found our selves getting bored again. Oh no, what to do without football? Well fortunately, football isn't the only sport that incites such excitement. There exists another that wields just as much fun. A certain sport that plays all year round. An international sport that knows no borders. A sport we humbly renown as Antifascism. The party is back on!

Ever heard those shitty white pride bands like Screwdriver (Jimi Yamamoto's favorite band), Lightning Rod, or Third Reich? If your ears haven't bled yet from listening to this crap, luck is on your side. The lyrics are atrocious and the music sucks (politics aside, it really fucking sucks). Some antifascists have long pondered about the distribution side of things. Who distributes their merchandise? Where the hell do all these fascist fucks order their stickers, patches, and swastika flags? You know, the ones seen in the background of the all their selfies posted on their Facebook pages. My oh my, wouldn't we just love to find "the stash." Rocky Mountain Antifa is pleased to announce we totally found it!!! Let's delve right in and meet the disgusting face of MSR productions. Meet David Daboll. 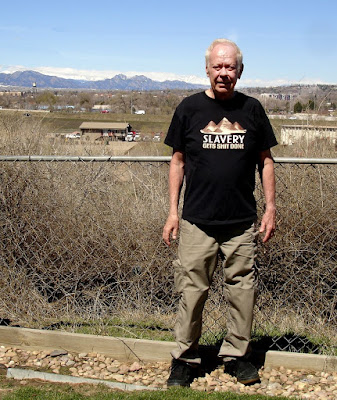 "We are the oldest and most reliable distributor of racialist musical products in North America." -David Daboll

Don't believe us? Check out MSR Productions for yourself. Look at the variety of "racialist" items that can be purchased. 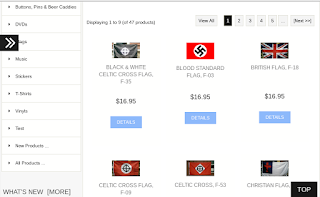 You're probably wondering, where does Daboll stash all this "racialist" merchandise? A good place to look might just be MSR headquarters at:

6095 W. 49th Place Wheat Ridge, CO 80033
(Phone: 303-456-2539).
Yep, the moron distributes white supremacist and nazi propaganda out of his house. If you just so happen to be in the area, your eyes may focus sharply as his garage door opens. It's near impossible to not notice the mound of neatly organized boxes that fill it. It's also hard to look past the silver Saturn SL with Nebraska license plates that swings by on a regular basis to pick up these boxes, sometimes more than once a week. The driver is the same man featured in a photo with Daboll, in the Midgard magazine article about MSR Productions (2016). Hmm, what do we have here? What's inside the boxes that are consistently shipped out of Daboll's garage? The same boxes that some dickweed from Nebraska picks up regularly. You guessed it!

The mystery Nebraska man (standing to the right) couldn't find a pair of clean blue jeans when this photo was taken. 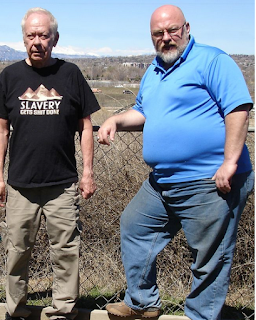 Daboll's house was purchased in 2004. We just can't help but wonder, what do all his neighbors think of him? They probably have no idea about the nazi apparel being sold out of their neighborhood. Good thing antifascists are here to blow the whistle on this nazi fuck bag! We can only imagine how shocking it must be to discover that "the oldest and most reliable distributor of racialist musical products in North America" lives right on your block. Especially since David puts effort into hiding his true identity. He keeps a docile posture, acting as sort of a chameleon hiding in plain sight. As one would think after viewing his unsuspecting activity on Meetup. 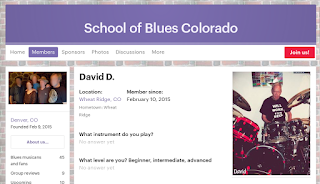 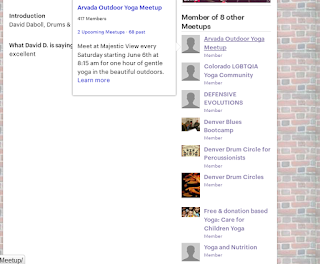 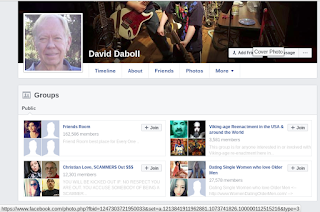 Fuck David Daboll. Fuck his white nationalist production company. Fuck his being able to blend into the community and play drums for churches without anyone seeming to realize the scumfuck trash he really is. This has gone on for way too long and it's time for business to close. Antifa is everywhere. What does this mean? For Daboll it means that antifascist everywhere are dedicated to putting MSR productions out of business for good. We do not tolerate nazi propaganda in the Rocky Mountain region. We do not tolerate it anywhere. We especially cannot tolerate someone shipping it to cities far and wide. David Daboll is not just our problem, he is everyone's problem. For more than 20 years MSR productions has been supplying your local hate groups with swastika flags, t-shirts, and violent racist music. Shut it down!

The world will be a safer place without MSR and without 70 year old David Daboll. As his health declines our joy gets louder. When his old age finally takes him under, we're going to party harder than when the Broncos won the Super Bowl! His grave will be the site of Antifascist fecal matter for years to come!

Posted by rockymountainantifa at 9:59 PM