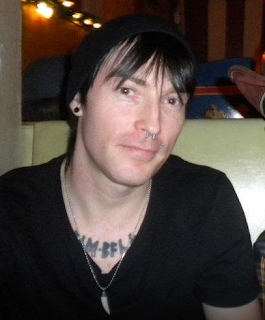 On the night of April 11th Chicago antifascist activists spotted known white Supremacist “Trigger” Tom Christensen (34) at Delilahs bar located on the Northside of Chicago. Shortly after being seen, a melee ensued between Tom and the local Antifa. Tom was sent sent to the hospital in an ambulance following a lengthy meeting with the business end of several cue sticks and a frantic 911 call from those with him. Unfortunately, two bystanders were injured by Tom during the scuffle. Both are alive and well.

For those who don’t know, Trigger Tom is a violent neo-nazi originally brought to public attention by Rose City Antifa (Portland) while attempting to infiltrate and gather information on local leftist/anarchists. Christensen has made hundreds of posts on the white supremacist forum (see bottom of article) known as stormfront.org under the username “whitepunx”. During his time in Portland he was actively promoting a known neo-nazi organization called Volksfront International. Tom has also claimed responsibility for shooting and paralyzing an Antifa comrade while in Portland. Shortly after being doxed, it became very clear that Tom’s presence would not be tolerated by antifascists in Portland and he was forced to move to Chicago and has been remained on the radar of antifascists. He has done a good job slipping through the cracks, until this past Tuesday.

Since Toms residency in Chicago he has been seen violently attacking women on more than one occasion and is currently involved in “men’s rights activism”. As recently as February, he has associated himself with groups like Proud Boys, supporting a fundraiser for a midwest chapter. Tom has been questioned by friends about his racism but is very good at using manipulative language to paint himself as non-threatening and not racist. Something he was said to be very good at in Portland as well. However, for those who are more perceptive or more knowledgeable in the language of fascism, his true intentions tend to surface.


Tom was confronted by Chicago antifascists who believe that neo-nazis are not to be debated with, but rather pushed out of any community or scene. If someone’s beliefs are based of the oppression of others, that belief poses a bigger threat to our society than the discomfort or pain experienced by those who hold them.
So, “Trigger” Tom Christensen, this message is for you. You can spin whatever story you want out of what happened at Delilah’s. You can deflect blame onto other groups all you want, we’re telling you that the reason you got dealt that beating, was we see you and know who you really are. Chicago is no more safer for you than Portland was when you tucked your tail and ran. But, hey, don’t take our word for it, stick around and we’ll have some more fun. Y’know, maybe shoot some more pool sometime.


Posted by rockymountainantifa at 3:19 PM